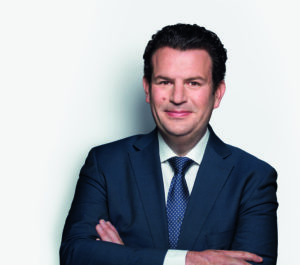 Federal Labour Minister Hubertus Heil announced today in the Rheinische Post that he would present a „draft law on the inclusion of the self-employed in the old-age provision system“ towards the end of this year and in so doing made suggestions about his plans.

SPIEGEL online has taken up this in a report and this evening the Tagesschau will also report on it: She interviewed Minister Heil, Peter Weiß (CDU), Johannes Vogel (FDP) and Andreas Lutz of the VGSD. The ARD team was in the newly renovated VGSD office in Munich this afternoon.

Hubertus Heil told the Rheinische Post: „We have three million self-employed in Germany who are not insured in old age.“ – This statement alone is a nuisance for us, because it assumes that the three million self-employed who are not yet compulsory members of the Deutsche Rentenversicherung or a pension fund do not provide for their old age at all. Studies such as that of DIW or of Allensbach have shown that most of these self-employed people do provide for their old age – only privately, as has been customary for many decades.

Openly only Rüruprente should be allowed as opt-out

His statements also allow conclusions to be drawn about the permissible forms of investment: „The self-employed must be members of a pension fund, such as doctors and lawyers, who are covered by the Rürup pension or who join the statutory pension insurance scheme. – From this sentence one could conclude that pension funds would open themselves also for other independent ones. But this is not the way it should be meant.

On the contrary, only the Deutsche Rentenversicherung or the Rüruprente should apparently be available to the self-employed who are not subject to chamber requirements. However, the popularity of Riester and Rürup pensions is limited and could be a bad business, especially for self-employed people with low incomes who do not benefit from the tax advantages associated with them.

This should also answer the question of who will finance the recently announced five to six billion euro per year basic pension, which is intended to upgrade low pensions (e.g. from part-time work or due to lower incomes in the new federal states). The basic pension was widely criticised as a „watering can“ pension policy.

The good news is that the self-employed would benefit from the basic pension, but this is not correct

Minister Heil is trying here to give the impression that the self-employed would benefit from the scheme for which they are paying. That is a second misleading claim that we must not let him get away with.

SPON also quotes Verena Bentele, President of the Social Association VdK Germany. She too openly admits what the inclusion of the self-employed is really about; she considers „such an obligation to be indispensable in order to stabilise the pension level at the present level“. 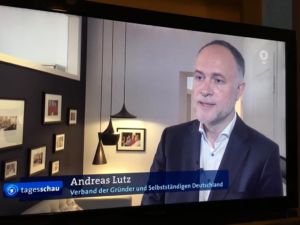 You can view the news item further up on this page, photo: Nadine Luck

As mentioned at the beginning, the ARD capital studio sent a team to the VGSD office in Munich this afternoon at 3 p.m. for this evening’s newsreel. And Andreas actually made it to the 20 o’clock show with a statement, which is seen by an average of almost 10 million people.

In addition, Labour Minister Hubertus Heil (SPD), Peter Weiß (CDU) and Johannes Vogel (FDP) also had their say. While welfare implied that independent ones did not provide for and in the age of the general public to the load would fall would not fall, white demanded consideration for fluctuating incomes of independent ones and freedom from contributions in the establishment years. Vogel said the regulation would not do justice to entrepreneurial freedom.

During the shooting, Andreas was also asked about the demand that the obligation to provide for old age (AV obligation) should only apply to future self-employed persons. This is one of four central demands made by the VGSD together with 23 other professional associations in its position paper on the AV obligation. The demands had previously been discussed over a longer period within the BAGSV (Bundesarbeitsgemeinschaft Selbstständigenverbände) and discussed with experts, including from the Deutsche Rentenversicherung (DRV). We received a lot of approval for the demands. The four questions we raised should also be the points for further discussion.

Further demands are that

Last year, the VGSD held a large number of talks with politicians and associations in order to establish a broad alliance for these demands. We assume that the pension obligation will be the most important topic on the political agenda until the end of the year (alongside legal certainty) from the perspective of the self-employed.

contribution in changed form also to be seen in daily topics

For the Tagesthemen the Tagesschau post has been re-cut and supplemented with further clips. Towards the end the statement of the VGSD will be shown again.

What do you think of the justification of the law by Minister Heil?

Please use the comment function below and let us know what you think of the proposed legislation, its justification and the new details that have become known.