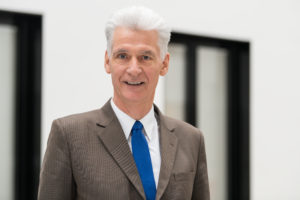 As reported in the last VGSD-News, State Secretary, Dr. Rolf Schmachtenberg from the Federal Ministry of Labour (BMAS), called me (Andreas Lutz) in mid-August at the VGSD office, phoned me in detail and invited me to Berlin for a discussion on 26 August 19, Monday last week.

The meeting dealt with the topic of status determination: How can the market be calmed down and more legal certainty be created? The connections with the planned obligation to provide for old age for the self-employed also played an important role.

The State Secretary is a mathematician and economist

State Secretary Schmachtenberg, 60 years old and a studied mathematician and economist (CV) had asked three members of staff from the ministry for an interview.

I was accompanied by Joachim Groth, who together with Victoria Ringleb leads the BAGSV working group „Scheinselbstständigkeit“ and by Jan Jagemann of the Bundesarbeitsgemeinschaft selbständige Wissensarbeit, who represented the client side.

Two and a half hours of conversation in an open atmosphere

The reason for the invitation to the discussion was my expert and constructive participation in the expert discussions on the obligation to provide for old age. Our action, which led to more than 450 comments on the BMAS website, Dr. Schmachtenberg was aware that the direct, predominantly very constructive feedback from the self-employed people concerned had been welcomed and that they had made an impression on the ministry. The existing uncertainty of many clients and its economic effects were taken seriously by the BMAS.

On Friday before the meeting, I had sent Dr. Schmachtenberg a catalogue with six solution fields and numerous concrete proposals for measures, which he and his staff had read carefully before the meeting. The solution catalogue (online here – we look forward to your feedback!) served as an agenda or checklist during the discussion. All points were addressed (in varying depth).

In order not to load the conversation with too high expectations, we had asked you in view of the complex and very controversial questions already in the apron not to put your hopes too high. The State Secretary once again stressed that implementing changes would take some time.

Nevertheless, the conversation exceeded our expectations in several respects. There were a number of concrete results, albeit not as much in terms of content as in terms of procedure. We had deliberately proposed immediate measures and solutions that could be implemented quickly and directly by the ministry or the clergy office without any change in the law. Others would require a legislative procedure.
Among other things, we discussed in detail the positive criterion we favoured, „relative fee level“ (in our opinion, the fee per time unit should be significantly higher for self-employed persons than for comparable employees), which was used by the Federal Social Court (BSG) last year as one of several criteria and which we would like to see significantly strengthened. We have also emphatically expressed the wish to ignore such criteria when determining the status which are logically necessary for the fulfilment of a task (e.g. place, time and topic of the training with a speaker).

Further meeting with Secretary of State agreed in September

We have discussed these and many other proposals in detail. The staff of the Ministry put forward counter-arguments to which we were able to respond. In the end, the employees gave us the feedback: Despite all the counter-arguments and restraint – we have now understood much better what you want, the discussion with you was worthwhile.

Dr. Schmachtenberg was a driving force in many respects and made his own suggestions, which we then discussed in a controversial and solution-oriented manner.

What is crucial is that we got into conversation with him and his staff, and that we did so in a constructive conversation that was to be continued with the clear aim of finding simple, understandable and legally compliant solutions. Dr. Schmachtenberg offered on his own initiative that we would meet him again on Tuesday, September 24, following the fourth expert discussion on the obligation to provide for old age.

.
In addition, Dr. Schmachtenberg announced that he would continue the technical discussions on the obligation to provide for old age after their conclusion in a slightly modified composition and with a changed focus: In further discussions, possibly starting as early as October, we would then consult with the BMAS, the Deutsche Rentenversicherung and the relevant associations (e.g. DGB, BDA, self-employed, clients) on the subject of status assessment procedures in several meetings in a solution-oriented manner.

Even after the discussions have been concluded, it may be possible to meet at regular intervals in the future. Because State Secretary Schmachtenberg is convinced on the basis of past experience: „There is no one hundred percent solution, there will always be a need, in view of constantly new, creative forms of cooperation, to talk about problem cases and to take follow-up action.

(The wording of the above report has been agreed with the BMAS.)

(English) New law: Self-employed are placed under general suspicion and come into the crosshairs of customs (English) California adopts law that allegedly requires one million self-employed to be hired (English) Six approaches to overcoming the existing legal uncertainty - Which are the most effective?
Permalink