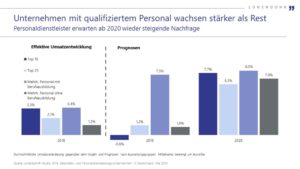 The AÜG leads to more temporary work for highly qualified workers. The trend will intensify significantly in 2019. Source: Lünendonk

Today the Mindelheim research company Lünendonk has published the Ranking of the leading temporary employment and personnel service companies in Germany. With declining order situation at the temporary workers first one saves, accordingly sensitively reacts the industry to the economic clouding.

The Act on the Temporary Employment of Employees (AÜG, known to many as the „Act against the Misuse of Temporary Employment and Work Contracts“), which came into force in April 2017, has made the use of temporary employment more difficult in recent years due to additional bureaucratic regulations.

On the other hand, it proved to be a sales driver for some personnel recruiters: they benefited from the displacement of self-employed workers into temporary employment, which is usually less well paid. The responsible Lünendonk employee told us in an interview Interview why the research company is so sure about this.

Weakest year since 2012 for industry

In 2018, the 25 leading temporary employment agencies experienced the weakest development since 2012 with sales growth of only 2.1 percent. The weak economy in the automotive industry from the second half of 2018 onwards led to a large number of temporary workers being cut. Accordingly, temporary employment agencies with a high share of sales in the automotive industry and in the helper sector had to cope with declining sales.

Hays with highest sales growth of all temporary employment agencies 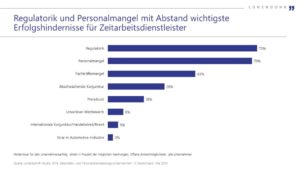 Regulation by AÜG is a bigger obstacle to employment growth than shortage of skilled workers, Figure: Lünendonk

Market leader Randstad (to which GULP belongs) grew by 2.1 percent, just like the average of the top 25 companies.

Among the 25 companies surveyed, the temporary employment subsidiary of Hays (Hays Professional Solutions GmbH based in Düsseldorf) recorded the highest growth in turnover (25.2 percent) and thus jumped from 10th to 7th place in the ranking of temporary employment agencies.

Thomas Ball, Senior Consultant at Lünendonk and responsible for the temporary employment and personnel services market, comments on the development as follows: „As a result of the effects of the reform of the Law on Temporary Employment, many highly qualified freelancers and engineers are now working under the responsibility of the AÜG. This ensures more growth in the temporary employment market.“

„As a sales driver … The reform of the AÜG and the continuing high demand for qualified personnel had an impact on the sales figures. IT freelancers and engineers no longer work for the customer out of their independence, but often via AÜG contracts“, it continues in the press release from Lünendonk.
Actually, the aim of the AÜG was to reduce temporary work. Instead, the law is now spreading this to highly qualified experts. The large majority of the self-employed people who have been well paid feel pushed into temporary employment and see this only as a temporary solution, as the statements of the participants in a study carried out by us together with GULP study clearly show.

Most concerning get involved only grudgingly with time work contracts, because they are due to their family situation spatially short term not mobile and much fewer orders on independent basis are offered than before introduction of the law. Those affected hope all the more that the Ministry of Labour will finally tackle a reform of the failed AÜG.

We are looking forward to the Lünendonk list for the IT freelancer market, which is to be published in July 2019. It is to be assumed that the growth in the area of temporary employment at the agencies active in this area will be offset by a decline in business in the area of the placement of freelancers, because the end customers in Germany, from the point of view of their compliance departments, do not relocate or discontinue projects with freelancers abroad that can be carried out in a legally compliant manner.

The enterprises, that profit from the displacement of self-employment in the area of temporary work, suffer thus possibly in other place all the more higher turnover declines. The bottom line is that projects are relocated abroad or terminated.

This development is probably an important reason why many large recruitment agencies have been working for years for a more meaningful form or reform of the AÜG in the sense of greater legal certainty. The majority of the agencies are convinced that there is nothing to be gained if people are forced into a form of employment they do not want against their will and see the danger of a brain drain.

(English) New law: Self-employed are placed under general suspicion and come into the crosshairs of customs (English) California adopts law that allegedly requires one million self-employed to be hired (English) Report: Meeting with State Secretary Dr. Schmachtenberg on the status assessment procedure
Permalink